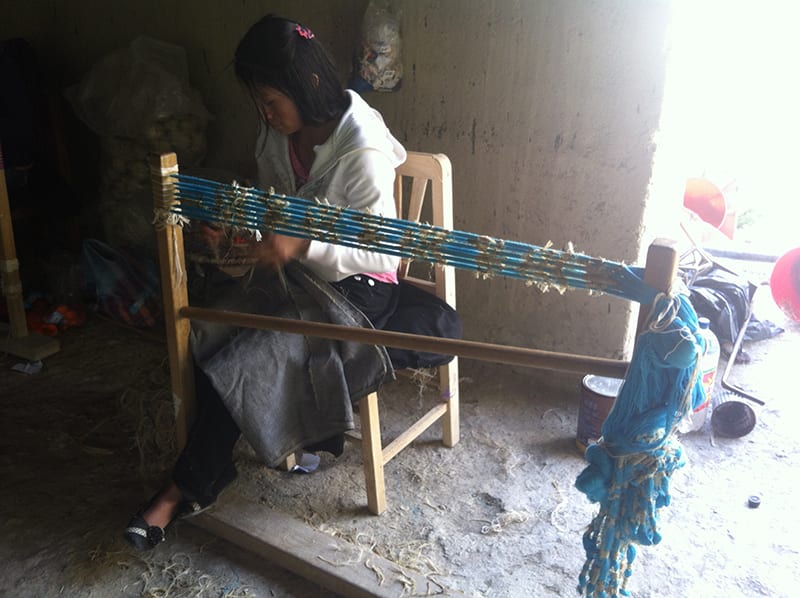 Ikat is a resist technique where a resist to the dye, traditionally cabuya cactus fibre in Ecuador, is tightly wrapped around the warp before dyeing the yarn to create a pattern that will appear later during the weaving. It is a rare technique in the region as the pattern needs to be held in the weavers head to ensure that the wrapped parts of the warp will translate into the correct pattern on the loom.

In the 25 years since I first visited Ecuador, natural dyes have all but dyed out in the country.  On my first trip it was normal to see people dyeing wool with cochineal, indigo or nogal (walnuts).  On my last visit to Gualaceo, I was delighted to see that a variety of natural dyes were still being used by the ikat weavers. 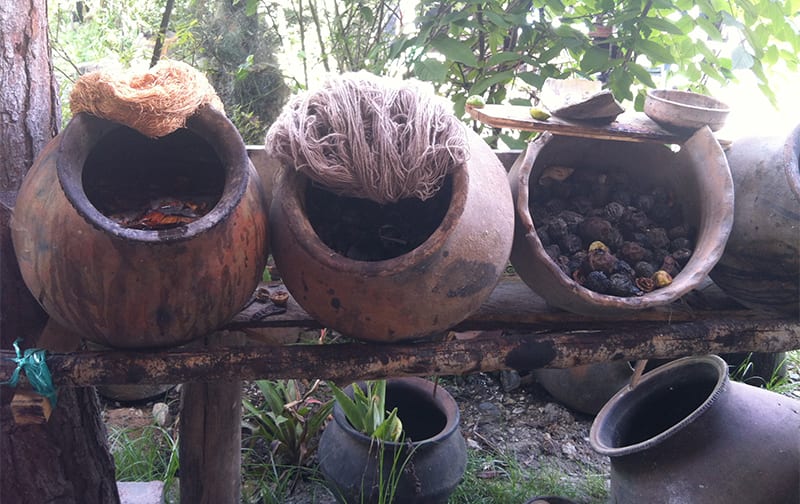 Traditional backstrap looms are still used where the weaver sits on the floor, although for textiles over 75cm in width, a foot pedal loom is often used.  The pedal loom I saw in Gualaceo was cleverly constructed from old bicycle wheels!

Ikat is a Malay-Indonesian term, which is common to many cultures around the world, including Argentina, Bolivia, Ecuador, Guatemala and Mexico.  In Ecuador, it is commonly known as a macana and the shawls which have long been a part of traditional dress are called Paños de Gualaceo.  For centuries, the macana or paño de Gualaceo has been a key element in the traditional dress of the women in Azuay province. Alongside the Panama hat, an embroidered blouse and two skirts, including an undergarment whose lower embroidered edge shows underneath the outer pleated skirt.  Increasingly, I see a generational divide.  In Sigsig where we work, very few young women wear traditional dress.

The three weavers pictured below are part of our Panama hat weaving association. I bought a whole roast pig for our group of 160 weavers in celebration of Panama hats being recognised by UNESCO as Intangible Cultural Heritage in December 2012. 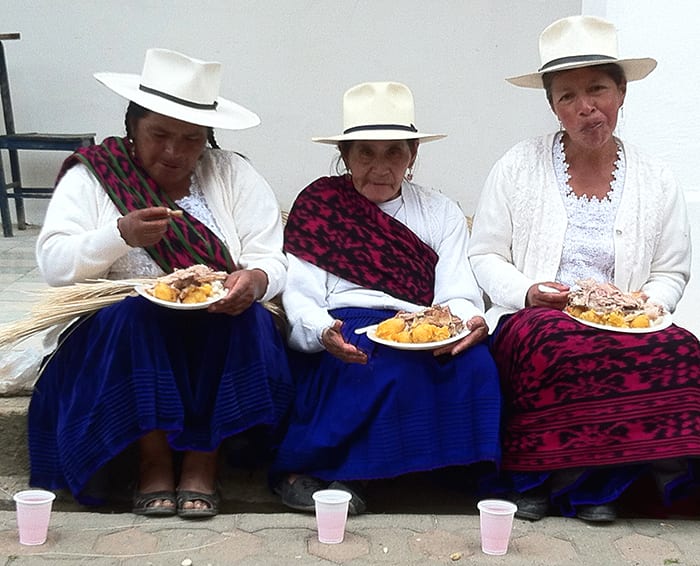 The ikat shawl is not only beautiful and part of the rich textile heritage of the region, it is also an incredibly practical accessory. Women use it to carry their purchases home from market, or they carry their baby on their back.  This mother, part of  Pachacuti’s weaving association, is selecting straw for weaving her hats for the following week whilst keeping her child secure on her back. 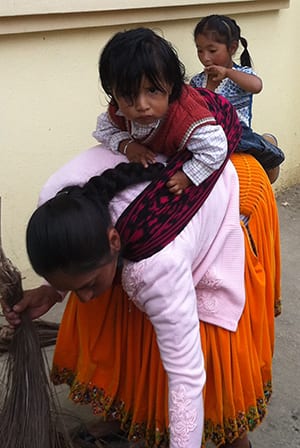 One significant change in men’s dress in Ecuador over the past 50 years has been the disappearance of ikat ponchos. This echoes the disappearance of this traditional textile technique. In the 1940s both wool and cotton ikat ponchos were worn in a traditional indigo blue and white. In the late early ’90s, indigenous Otavalan men  dress underwent a Western revolution. This was partly due to the money pouring into the region as a result of the popularity of Ecuadorian chunky knitwear. With more disposable income, many men opted to exchange their white pleated shirt, white cotton trousers, alpargata shoes, poncho and felt hat, for jeans, trainers and a T-Shirt.

Ikat is extremely labour intensive and requires considerable experience to memorise the complex patterns. These need to be tied into the warp and which, when combined with the weft, magically transform into a pattern.  According to one weaver, there are only around 15 ikat weavers left in the region. 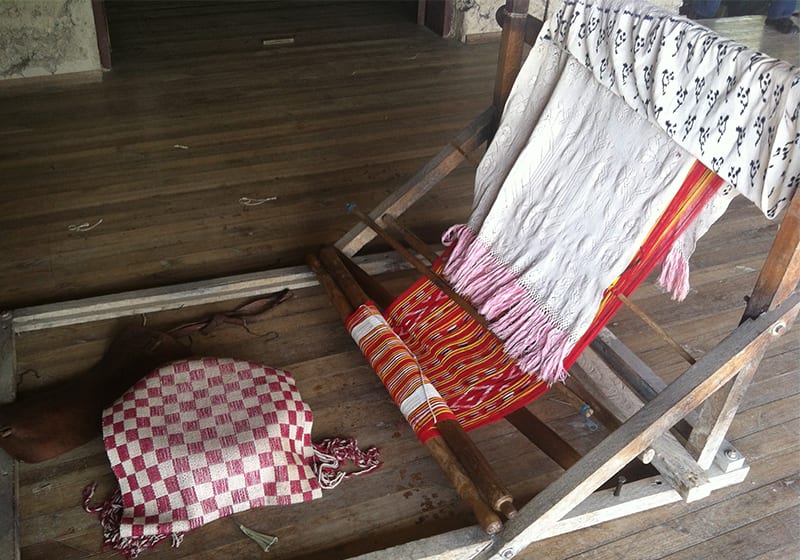 I have been given ikat shawls in Ecuador on numerous occasions by my weavers, but have always recognised that these accessories may not exist in a few year’s time. Hopefully the new UNESCO recognition will help to safeguard this dying skill and ensure it plays a part in the future textile heritage of Ecuador.

This website uses cookies to improve your experience. We'll assume you're ok with this, but you can opt-out if you wish.

This website uses cookies to improve your experience while you navigate through the website. Out of these cookies, the cookies that are categorized as necessary are stored on your browser as they are essential for the working of basic functionalities of the website. We also use third-party cookies that help us analyze and understand how you use this website. These cookies will be stored in your browser only with your consent. You also have the option to opt-out of these cookies. But opting out of some of these cookies may have an effect on your browsing experience.
Necessary Always Enabled
Necessary cookies are absolutely essential for the website to function properly. This category only includes cookies that ensures basic functionalities and security features of the website. These cookies do not store any personal information.
Non-necessary
Any cookies that may not be particularly necessary for the website to function and is used specifically to collect user personal data via analytics, ads, other embedded contents are termed as non-necessary cookies. It is mandatory to procure user consent prior to running these cookies on your website.
SAVE & ACCEPT